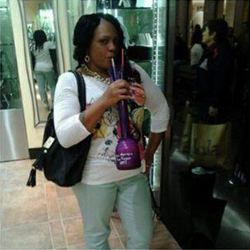 Nearly a hundred people turned out for a vigil for Yuvette Henderson, a 38-year-old African American mother of two who was gunned down by Emeryville police on Hollis Street, just inside of Oakland city limits. A small memorial created shortly after her death grew with more candles and flowers as people began to arrive around 7:30pm for the vigil at 34th Street and Hollis. An hour later, perhaps two thirds of those gathered proceeded to march to the Home Depot and Pak N Save/Safeway in Emeryville before returning to the memorial. By that time, police had left the area and those remaining walked over to the ExtraSpace Storage facility where Yuvette was killed and inspected the scene of the shooting, finding bullet holes in a metal garage door and some blood and flesh left on the pavement.