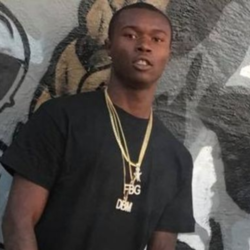 Police in Vallejo, California, said in a news release that the six officers shot "multiple rounds" at the driver — identified by his family as Willie McCoy, 20 — in the span of four seconds Saturday night in a Taco Bell parking lot. It's unclear how many bullets struck McCoy, but his family said they believe at least 20 may have hit his car based on the number of holes that witnesses counted at the scene.

"It seems like an execution," David Harrison, McCoy's cousin and manager, said Wednesday. "It looks like my baby cousin was executed by a firing squad."

A blurry cell phone video uploaded on YouTube shows the moment six Vallejo police officers shot and killed a local rapper who passed out behind the wheel of a vehicle in a Taco Bell drive-through line, according to a witness.

The Vallejo Police Department said it is working with the Solano County District Attorney's Office to investigate the shooting — the latest in a department that in recent years has been criticized for excessive use of force and has been the subject of civil rights complaints.

In July 2020, District Attorney Krishna Abrams announced that she had recused herself and her office from investigating two deadly police shootings in Vallejo involving the deaths of Sean Monterrosa and Willie McCoy.