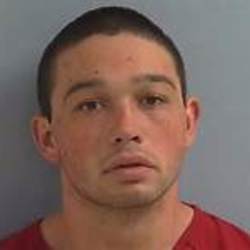 A 28-year-old Coulee Dam man died Saturday as he fled from authorities chasing him as a suspect in an armed robbery near Tonasket, the county sheriff said.

Okanogan County Sheriff Frank T. Rogers said in a statement Monday that William J. Dick III stopped breathing after being chased and finally brought down by a Taser high-voltage stun device as he and another suspect “bailed out of the vehicle and took off running through the woods” on BIA Road 66 at the north end of the Colville Indian Reservation.

At about 9:50 a.m., the sheriff said, a Sagle, Idaho man contacted a U.S. Forest Service officer on highway 20 outside Tonasket and reported being robbed. He said he’d been hitchhiking and caught a ride from two men and a woman in a van. The 47-year-old from Idaho said the two men started using drugs and acting crazy, then one pointed a pistol at his head, stole his fly fishing rod and $150 cash, then let him out of the van.

About an hour later the same USFS officer spotted the van and its three occupants at a campground on Lyman Lake Road and called for additional officers. A Washignton State Patrol trooper arrived and tried to stop the van, but the driver accelerated, and a chase began, ending up about five miles onto the Bureau of Indian Affairs Road 66.

The van hit a tree in the road and wrecked near the turnoff to Dugout Mountain. That’s when the two men ran into the woods. The state trooper and the Forest Service officer pursued and caught up to Dick, who was “ordered to stop several times and then a taser was deployed,” the sheriff’s release stated. “The suspect was secured and put into custody. The suspect then stopped breathing. CPR was begun and emergency (personnel) were called to the scene but they were not able to revive the subject.”

The other suspect, Kyle S. Cate, 23, of Okanogan, eventually walked out onto a road and gave himself up to a state trooper.

The sheriff said the robbery victim identified the suspects as the two who had robbed him.

After being checked out at a hospital, Cate was booked into the county jail on charges of first-degree armed robbery, felony eluding, third-degree driving while suspended and on an arrest warrant out of Lincoln County.

The 33-year-old woman in the van was not charged “at this time,” the sheriff said.

A search of the area and the van was conducted. The .22 caliber pistol was not found, Sheriff Rogers said, but drugs were found in the van.