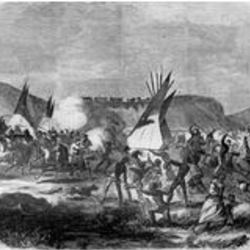 Whitestone Hill Battlefield State Historic Site is located 23 miles southeast of Kulm in Dickey County, N.D. It marks the scene of the fiercest clash between Indians and white soldiers in North Dakota. Several of the great Dakota and Lakota Sioux Tribes have become well-known through history and legend. The Hunkpapas with Sitting Bull, the Oglalas led by Red Cloud and Crazy Horse, the Brule under Spotted Tail, and the Santees with Little Crow. These are familiar names to many people.
But the Yanktonais and Hunkpatinas have received little attention in history books and have remained relatively obscure. Likewise, the massacre of Whitestone Hill has been given little notice in American frontier history despite historian Elwyn Robinson¡¦s observation that it was the bloodiest ever fought on North Dakota soil.
The massacre at Whitestone Hill represented a type of Army-Indian warfare that became common on the western frontier. A method of warfare that had a devastating effect on the Indian way of life. When the 1863 Massacre of Whitestone Hill is viewed in conjunction with the 1864 Sand Creek Massacre, the 1868 Washita River Massacre, and the Massacre at Slim Buttes, its significance in the history of the American West becomes obvious.
The autumn of 1863 saw the Yanktonai and the Hunkpatina Sioux camped at Whitestone Hill doing as they had for generations, hunting buffalo and preparing the meat for the winter.

September 3rd, 1863
On this day in history, General Alfred Sully traveled into Dakota Territory hoping to locate and punish the Santee Sioux who had fled after the Minnesota Uprising. What he found instead were nearly 4,000 peaceful Indians camped at Whitestone Hill. They were Yanktonai, Hunkpatina, and some Isanti. The vast majority were not present nor did they participate in the events that had occurred in Minnesota in 1862. Yet this mattered little to General Sully. His mission was to eliminate Indians, and if they were peaceful, it only made the job easier. Major House leading the 3rd Battalion of the 6th Iowa Calvary - misjudged the number of Indians to be about 600-800. When his men rode fully into the camp he saw about 600 lodges. He realized that he had grievously underestimated the size of Indian Strength and that there were over 1,000 Indians at the Site. Since retreat was impossible and an attack would only result in the complete annihilation of his whole party he sent his chief scout for reinforcement some nine miles away to Gen. Sully.
Sully's command was less than a mile away when the Indians saw them coming. Departure preparations became frantic. Tipis were stripped, travois were hastily attached to ponies and dogs. Possessions and small children were strapped to travois. Masses of Indians began streaming east, down a ravine that opened into a shallow mouth at the rear of the village. It was nearly sunset when Sully's troops reached the scouting party.
Shortly before sunset Sully's reinforcements arrived with a rush and so began the massacre of Whitestone Hill. The 6th Iowa formed on a hill north of the little valley where the Indians had assembled. The 2nd Nebraska formed on high ground south of the valley. Major House attacked from the north. Although the Indians scattered in as many directions as possible, most tried to escape down a ravine. As the Indians came to a saucer-like broadening of the ravine about one-half mile from the village they began to gather in a large throng.

They were surrounded by Colonel Furnas' Calvary, Major House's Battalion, and Colonel Wilson's 6th Iowa troops. The light of the following day revealed a field of carnage. Dead and wounded men, women and children lay in the campsite as well as the ravine. Tipis stood vacant, or drooped in various stages of destruction. Camp equipment, personal items, tools, utensils, weapons, toys, injured or dying horses and dogs littered the ground. Injured women protected babies and the little children. As the soldiers looked after the wounded and gathered the dead, Sully moved his camp to the battlefield. While some squads of soldiers patrolled the region searching for escapees other men were put to work destroying Indian possessions. We do not know what they did with the Indian dead. Chief Big Head, in leading a charge trying to break the lines of the 6th Iowa, in order that his men might escape was taken prisoner. Many women, elderly and two wagon loads of children were also held as prisoners. One account states that appproximatly 150 warriors were killed, along with as many as 200 women and men. General Sully's loss was 20 soldiers killed and 50-60 wounded. It is believed that most of the soldiers were shot by their own gunfire.
The next morning Union soldiers found dead and wounded in all directions near the Massacre site. One baby was found attempting to nurse from its dead mother. This baby was returned to the Indians. She later re-visited the site when she was an elderly woman.
The results of the Massacre of Whitestone Hill were mixed. East of the Missouri River Whitestone Hill was the last large Indian-military confrontation. West of the Missouri, the massacre inflamed sentiments against white encroachment. The Federal Government having started a small fire was now faced with a much larger, more serious one. The western frontier did not become secure despite a battle in 1864 at the Killdeer Mountains and the Indians were far from subdued. For fifteen years after Whitestone Hill the Dakota and Lakota fought the United States military.

Pa Tanka  (Big Head)
(1838-1897)
Pa Tanka was a chief of the Upper Yanktonai of the Dakota Band. He had 25 families and lodges in his camp. Mato Nunpa and Pa Tanka with other survivors were taken to Crow Creek, S.D. and held prisoner for two years. Pa Tanka¡¦s hair was cut and he dressed in a suit as a part of the delegation from Standing Rock that went to Washington D.C. in 1888. Upon his death in 1897 he was buried in the Cannonball Area.

Mato Nunpa  (Two Bears)
Mato Nunpa was one of the prominent chiefs of the Upper Yanktonais Dakota. The Yanktonais hunting territory ranged from the eastern Dakota Territory to the Missouri River on the east side of the Missouri River. He survived the Whitestone Massacre and returned to Standing Rock. His band included 55 lodges (families).
Chief Two Bears signed the Treaty of Ft. Laramie in 1868.

Chief Cottonwood
Jerome Cottonwood was at Fort Yates as early as 1870. Cottonwood is listed in the early Standing Rock Census of 1876 as head of the Cottonwood tiospaye (extended family) and tiwahe(family) among the Lower Yanktonais. He was listed as a Chief by the agency.

Sight Unknown To First White Settlers
Dakota Territory was scarcely populated at this time and the site of the Massacre was not known to early settlers. In fact, none of the early settlers knew about the massacre or that it had occurred near where they were establishing their homes. The discovery of the site was accidental and went unnoticed for a number of years.

Buffalo Bones led to Re-Discovery
The field was discovered by Frank Drew while driving through the hills in the western part of Dickey County. He was in search of buffalo bones to sell in nearby Ellendale, N.D. He had sold bones many times before but this time he came across a lot of bones which proved to be other than buffalo bones. He did not care to let others find his picking grounds and said nothing about his findings. For some years there was nothing accomplished to identify or preserve the site of the Massacre.

Dedication of Soldier Monument
On March 13, 1905, a bill was passed by the State Legislature accepting the land grant and authorizing the governor to appoint a commission to have the care and management of the park. Theodore Northron, E.R. Kennedy, and H.F. Eaton were appointed to the commission. Under another Act of Congress the commission sold 572 acres of this land and with the funds obtained a fence around the remaining 68 acres and erected a monument. This monument was dedicated with soldier ceremonies in October 1910.


Today the Whitestone Battlefield State Historic Site includes a portion of the massacre site and a small museum with exhibits explaining the 1863 Sibley and Sully expeditions. There is one large monument dedicated to the the soldiers who died in the massacre and a small plaque remembering the Indians that had fallen. Efforts are continuous to have a memorial for the Indians that find their final resting place at Whitestone Hill.

If coming from Jamestown, drive about 40 or 50 minutes south until you hit Edgeley, North Dakota. From Edgeley, head west on ND Highway 13, and this eventually turns into south-bound Highway 56. Travel south of Kulm about 10 or 11 miles to 88th Street SE. Travel east on 88th Street SE for four miles, and then turn north (by this point you’ll see “Whitestone Hill” signage to direct you to the site).

If coming from Aberdeen, South Dakota, drive north to Ellendale, North Dakota, and head west on ND Highway 11. Travel west on Hwy 11 for about 20 miles, and turn north onto ND Highway 56. Drive 10 miles north on Highway 56, and turn east on to 88th Street SE. Drive the four miles east, and turn north at the Whitestone Hill signage.