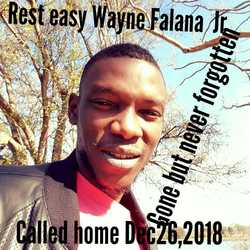 Police officers making a domestic welfare check on a Clearwater woman who asked family members on Facebook to call 911 fatally shot her boyfriend when he opened fire on them.

Officers responded to the apartment and contacted Vann at the back door. While they talked to Vann, Wayne Falana Jr., 35, appeared behind Vann and opened fire on the officers, Castelli said.

The officers took cover and Falani ran to the front of the apartment and began shooting through a glass door. Castelli said Falani ran into the roadway, still armed with a firearm.

"Four or five police officers, I could hear them yelling, 'There's another one down the street, and then they went running with guns drawn," neighbor Bill Shey told WFTS-TV.

Police say one officer was shot in the foot and treated at the scene. The four officers who fired their weapons will be placed on administrative leave pending an investigation.

Vann left the apartment and has not been seen or heard from since, Castelli said. Police want to speak to her about the series of events leading up to the shooting.