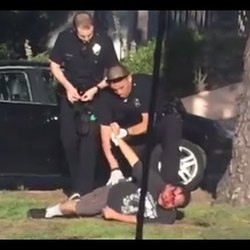 An unarmed 48-year-old man was shot in the head and killed by Officer Cairo Palacios because the cop thought a towel wrapped around the victim’s hand was concealing a weapon. Then the man was rolled over and handcuffed. Both the officer involved and his partner allege they were stuck in traffic when DeLeon walked in their direction. His arms were extended and covered by a cloth, and he didn’t obey the officers when they exited their vehicle and commanded him to “drop the gun,” the officers say. Palacios fired when DeLeon continued walking in their direction. DeLeon’s son later explained that his dad usually carried the towel to wipe off sweat. The victim may have been flagging down the officers for help, but the reason for doing so is unclear. "At first, I thought it was like a random person that did it," William DeLeon said. "Then I found out it was the cops. I didn't understand why, because I know my dad wouldn't do anything to provoke it."

After shooting DeLeon in the head, the officers rolled him over and handcuffed him behind his back.

On Tuesday, April 19, 2016, the Police Commission unanimously determined that Officer Cairo Palacios was justified in shooting DeLeon, deciding he reasonably believed the 48-year-old held a gun under the towel.