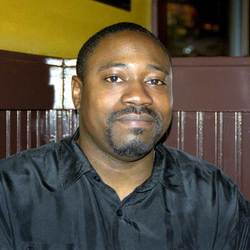 Dashboard camera footage showed Scott running away from his vehicle after North Charleston police officer Michael Slager pulled Scott over for a broken brake light. In the following minutes, recorded on a bystander's cellphone, Slager caught up to Scott in an open field, and after a short struggle, Scott, who was unarmed, broke free and began to run away. Slager then shot Scott multiple times from behind. Slager was fired from his job and faces a felony murder charge. The officer, Michael T. Slager, 33, said he had feared for his life because the man had taken his stun gun in a scuffle after a traffic stop on Saturday. A video, however, shows the officer firing eight times as the man, Walter L. Scott, 50, fled. At a bond hearing for Slager, the bystander statement was revealed:

According to the witness, Scott was on the ground, and the officer crouched over him — once punching Scott’s right side. (Slager later said he jabbed his Taser into Scott’s side to deliver a shock.) Santana heard the sound of electricity. He started recording the video on his cellphone near the end of the struggle. Scott “got up fast and aggressive,” but Santana couldn’t see anything in his hands. He then turned and ran, and Slager shot him in the back. Santana became frightened when a backup officer’s cruiser sped by. After telling an officer that he had recorded the shooting, Santana hung around for a short while but soon walked away, worrying that the police would take his phone and the video on it. He went to a nearby store, where he played the video to people there. That’s when he realized its importance.

On June 8, 2015, the shooting officer was indicted in the death of Walter Scott.

The State Law Enforcement Division's handling of crime scene evidence has prompted a point of legal contention and a motion by Michael Slager’s attorney for a court inquiry into the agency’s destruction of evidence.

The solicitor announced via Twitter on August 6 that a bond hearing had been scheduled for Officer Slager sometime in Augist.

On September 8, Slager's defense announced that they would be presenting new photographic evidence showing Scott attacking Slager before the former officer killed him. On September 14, the court announced that bond had been denied for Officer Slager.

The North Charleston City Council voted 10-0 to authorize a civil settlement on Thursday night, October 8, 2015. Scott’s family will receive $6.5 million in compensation from the city.

On November 26, 2015, South Carolina authorities released patrol car dash camera video Thursday showing Walter Scott getting out of his car and running away after a traffic stop moments before he was shot.

November 2016 The judge denied a defense request to acquit Slager and said that the prosecution had proved beyond a reasonable doubt that Michael Slager had malice when he shot Walter Scott.

On December 5, 2016, the jury of 11 whites and one black person was dismissed and a mistrial was declared in the case. Prosecutors said they would seek a new trial for Mr. Slager, who was fired after the shooting, and the Scott family expressed confidence that he would ultimately be convicted.

A judge set the retrial date for Michael Slager for March 1, 2017.

May 2017 Slanger to plead guilty

On December 4, 2017, a several-day sentencing hearing began to determine the fate of Slager. Slager could face up to life in prison. The sentence is at the discretion of the judge.

In January 2019, a federal appeals court upheld the 20-year prison sentence for Slager.

As of mid-July 2015, the ACLU and NAACP had joined calls urging Dept. of Justice to investigate the North Charleston Police Department in connection with the death of Walter Scott.