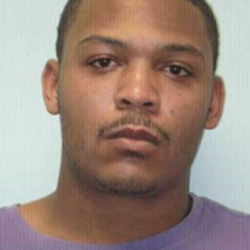 Victo Emanuel Larosa, 23 died as part of a citywide drug bust operation that led police to an altercation the Jacksonville Sheriff's Office confirmed.

An undercover officer in an unmarked car met the suspect, who told the officer to head to a parking lot at the Mayfair Village apartment complex where he was going to buy $60 worth of crack cocaine.

The suspect went into an apartment and came back saying that the guy there had bad stuff, but that he knew a guy across the street that had something better.

Officials said that the suspect told the potential buyer he didn't know was a cop to wait in the car and he would send the other guy over.

A short while later the man and a silver vehicle pulled up next to the officer, the suspect grabbed drugs from a second suspect in the vehicle and brought them over to the undercover car.

The detective gave a take down signal and other officers moved in to make the arrest, police said.

The suspect in the silver vehicle noticed what was happening as an officer on foot came toward him and told him to get out of the vehicle. The suspect then took off in reverse, hitting the officer so hard that he was knocked into the air, losing his service weapon and flying over the vehicle. Police later said the officer suffered serious head injuries.

The driver of the vehicle tried to keep going, slamming into several other vehicles before police performed a vehicle take down, causing the suspect to crash into a building.

The suspect jumped out of the car an took off on foot with two police cruisers in pursuit.

The suspect, whose name was not released Thursday night, fled down Beach Boulevard, crossing to Lamay Avenue and eventually ending up on Drexel Avenue, where he started running through yards and jumping over fences.

According to police, the suspect then fell while he was jumping another fence, allowing an officer to catch up with him. While the suspect was getting to his feet, police said he reached toward his waistband while turning toward the officer.

Officials said the officer, fearing for his life, fired eight rounds, hitting and killing the suspect.

When asked, police said that they had not determined if the suspect was actually armed.