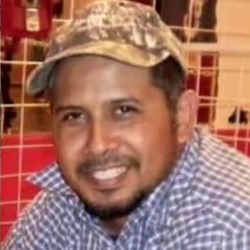 A federal agent shot a Ulysses Villadares, a kidnapping victim, dead during a predawn raid at a northeast Houston home Thursday, January 25, 2018.

FBI spokeswoman Christina Garza said during a news conference that the man was shot during an "operation" at the house on Elbert Street around 3:45 a.m. He was pronounced dead a short time later at a nearby hospital.

Garza said the FBI could not release any details about the man or the circumstances of the shooting, but court records obtained by the Houston Chronicle showed that the victim, Ulysses Villadares, had been kidnapped in Montgomery County on Wednesday.

Two gunmen burst into a home in Conroe, about 40 miles north of Houston, restrained a man and his 12-year-old son and demanded $8,000, Conroe police Sgt. Jeff Smith told the Chronicle. They took the father with them when they left, along with video-game systems and a sword, and told the boy not to call the authorities.

The boy managed to break loose after they left and went to a neighbor, who called police.

Police were speaking to the boy and his uncle — who also lived at the home — when the uncle got a ransom call from a man who claimed to have connections to the Gulf cartel.

At that point, Conroe police called in the FBI, who obtained a federal warrant that helped them track the suspects' phone to a hotel in the Webster area, Smith said.

When federal investigators forced their way into the hotel room around midnight, they detained and questioned three people, including Cunningham and Sanchez. From that, authorities were able to trace the victim's location to the Trinity Gardens home in the 7300 block of Elbert.

The Conroe man was shot and killed — still bound in duct tape, officials said — by one of the FBI agents trying to rescue him in an early morning operation in northeast Houston. His brother, Ernesto Valladares, wants answers about how it happened.