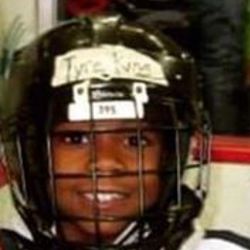 City and police officials are planning to discuss this morning the 13-year-old boy who died Wednesday night after he was shot by Columbus police in the Olde Towne East neighborhood.

Tyree King died at Nationwide Children’s Hospital around 8:22 p.m., roughly half an hour after he had been shot multiple times by an officer in an alley near East Capitol Street, police said.

Officers had initially been called to the area of East Broad and 18th streets on an armed robbery call, according to Sgt. Rich Weiner, spokesman for the Columbus Division of Police.

Officers approached three males on nearby Hoffman Street, two of whom fled on foot to the alley off East Capitol Street, police said.

King, who was one of those fleeing, pulled what police later determined to be a BB gun with an attached laser sight from his waistband. An officer then shot King, police said.

The officer and the other young male with King were not injured.

A man who lives in the area, Chris Naderer of Hoffman Avenue, said he was in his home when he heard someone knock down a gate in his backyard. He looked outside to see a police officer chasing two young men into an alley behind his home. He said he then heard three to five gunshots from the alley.

Police said the young male who was with King was interviewed and released pending further investigation. This person’s identity was not released by police early Thursday, nor was the name of the officer who shot King.

None of the police involved in his murder were wearing body cameras. An unofficial autopsy found that King was most likely running away when he was shot, contraditing police accounts.

September 2016 Autopsy shows Tyree was shot while running away

May 2017 Killer cop not indicted

September 2016 Testimonial from someone who knew him