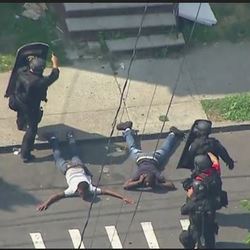 Crawford was one of six teenagers involved in a carjacking and police chase. He was eventually struck by a police car and pronounced dead at the scene. The other five suspects are in police custody, said Clara Rodriguez, chief assistant prosecutor at the Essex County Prosecutor's Office.

After being spotted by police, the six suspects were pursued through the South Ward into the vicinity of the Hawthorne Avenue and Demarest Street intersection, officials said. Police caught three suspects immediately, and struck a fourth with their car. He was pronounced dead at the scene, authorities said. Another two suspects ran off to a residence on West Runyon Street, where an hours-long standoff with the police department's Emergency Response Team began. While neighborhood residents poured out of their homes to watch, officers could be heard pleading with the suspects to exit the residence. At approximately 11 a.m., the suspects surrendered to police, officials said.