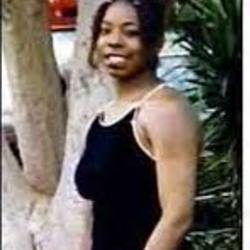 Shot dead by police officers called by family members who could not wake her as she lay unconscious in a car . She was 19 years old.

In the early morning hours of December 28, 1998, Tyisha Miller, a 19-year-old African American woman from Rubidoux, Riverside, California, had been driving with her 15-year-old friend late in her aunt’s Nissan Sentra when the car got a flat tire. A passing stranger helped them change the tyre, but the spare was flat, so the stranger led them to a filling station  to inflate it. The tire would not hold air so Ms. Miller waited in the car while the man drove her friend home to get assistance from the family.

When relatives arrived they found Ms. Miller apparently comatose in the locked car, with the engine running and the radio on. She was shaking bodily and foaming at the mouth, and had a .380 semi-automatic pistol in her lap. Unable to wake her they called 9-1-1. Four Police officers arrived at the scene within minutes and, informed by family members of the presence of a gun in the car, approached the vehicle with guns drawn. After attempting for several minutes to get a response from Miller, the decision was made to force entry into the vehicle as Miller was in apparent need of immediate medical attention. As one of the officers was attempting to remove the gun, Miller is said to have sat up and grabbed the weapon, at which point the officers opened fire 23 times, hitting Ms. Miller with at least 12 bullets, including 4 in the head.