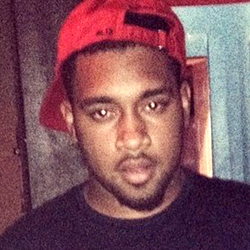 Blackwell said officers found Hummons in the street with a gun after he made 911 calls on himself while pretending to be a simple bystander. He wanted to die at an officer's hand, Police Chief Jeffrey Blackwell said, and had even texted friends about his plan.. A probation officer arrived shortly after. Officer Kim was the first to approach Hummons and was shot during the exchange. Hummons' mother arrived on the scene and was in the street during the shooting, Blackwell said. She went looking for her son that morning because she was worried about him, Blackwell said. He had been having trouble with a girlfriend, she told police. Blackwell said he believes, had Hummons' mother not been in the street, more people would have been injured or died.

On December 2, 2015, after a press conference in which prosecutors announced that no charges would be filed in this case, they released dash-camera video footage of the killing. The video shows 21-year-old Trepierre Hummons standing near fatally wounded officer Sonny Kim. He turns toward the cruiser after it arrives and advances with gun raised. The video shows Hummons' hands fly upward; then he appears to turn back toward Sandmann just before disappearing from view.