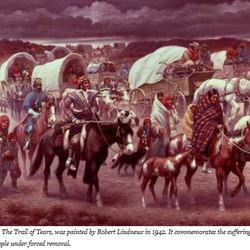 Trail of Tears,
Washington, District of Columbia
May 23, 1830

In 1830, the U.S. government passed what was called the Indian Removal Act, as one of the first formal means of displacing Native Americans from land that the government and the wealthy White sectors had plans for.

Native communities had been outright attacked in many cases before this, particularly in the northeastern part of the country, but Congress and Democratic President Andrew Jackson decided to take a different tactic.

The land, in what is now Georgia, South Carolina and Florida was inhabited by the Cherokee, Choctaw, Creek, Seminole and Chickasaw nations, who lived in relative harmony with each other. However, the growing slave labor plantation system was in need of expansion and the last thing that plantation owners wanted was any kind of alliance between Black slaves and Native communities, an alliance that some military strategist had seen before.

During the Seminole Wars in Florida, Andrew Jackson had seen the danger of runaway slaves finding sanctuary in Native communities, as several of the bravest Seminole fighters were Black Indian, as is well documented in Black Indians, by William Loren Katz.

Jackson wanted no part of any kind of a repeat with Black and Native resistance to the U.S. plans for expansion, so his administration devised a plan of forced removal of the Cherokee, Choctaw, Creek, Seminole and Chickasaw people to Oklahoma, a campaign, which began as early as 1831.

The pretext of this forced removal, according to the Jackson administration, was to provide greater separation between Whites and Native people in order to avoid future conflicts. The White-owned newspapers in the area fed the perception that Native people were dangerous, based on how they were portrayed. In the book News for All the People: The Epic Story of Race and the American Media, the authors demonstrate that not only was there a disproportionate amount of news stories about Native people at that time, most of the stories framed Natives as violent and a danger to White settler communities.

The forced removal of what was known as the Trail of Tears began on May 23, 1838, but the Cherokee were rounded up by U.S. troops months before and interned in camps, where they were held until the long march west began.

Native men, women, children and their elders were forced to march by U.S. troops who held them at bayonet point throughout. Most accounts note that there were inadequate provisions of food, clothing and medical care for the thousands that were forcibly removed.

The forced removal of the Cherokee Nation took them 1,000 miles west to Oklahoma, but along the way thousands died from starvation, disease or freezing to death during the winter months of the forced removal. Some estimates say that 55 percent of the Cherokee Nation died as a direct result of the Trail of Tears. (A Little Matter of Genocide, Churchill)

However, to those in power in the U.S., the loss of this many Native people was of little concern, especially considering the amount of land that was then appropriated by the federal government. The amount of land appropriated from the Indian removal of Native Nations in the southeast part of the country was roughly 25 million acres, which was then used by White Settlers.

In recent years the Trail of Tears has become a mild embarrassment to the U.S. government, but much of the official landmarks have been sanitized in order to diminish the brutality of what is known as the Trail of Tears. Excellent examples of the misinformation of this history on those landmarks are well documented in James Loewen’s book, Lies Across America.

After World War II, the Genocide Convention laid out a legal framework for how we currently define genocide. Often, people think that genocide is only the outright killing of a people, but the legal definition includes the theft of a people’s culture, preventing a group of people to reproduce or the forced removal of people from their traditional lands. We know that thousands died in the process of the Trail of Tears, but we should never forget the loss of land, culture and heritage that came with this heinous campaign of violence against Native people in U.S. history.

Many Native people resisted the forced removal and died in the process. It is important that we honor their resistance and never forget crimes committed like the Trail of Tears.