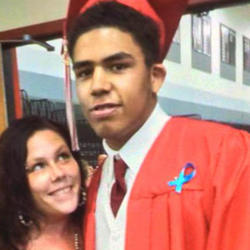 Tony Terrell Robinson, Jr. was born into poverty and spent the last moments of his life bleeding from a gunshot wound, surrounded by no one but local police officers on the porch of his shared apartment. At around 6.30pm Friday, March 7, 2015 Madison police officer Matt Kenny forced entry into the house where Robinson had been living for the past few months with two of his friends. Shots were fired. A few minutes later, a witness says she saw officer Kenny and another officer dragging the limp, bloody body of the biracial 19-year-old out on to the porch.

Officer Kenny was responding to a series of 911 calls about a young man behaving erratically, possibly violently.  Toxicology reports later confirmed that Robinson, Jr. had taken drugs prior to his deadly encounter with Officer Kenny.  According to a CNN article at the time,

Kenny reported that Robinson hit him and knocked him into the wall inside the apartment, an account that the prosecutor said was supported by damage to drywall.

After that, Kenny said he was afraid Robinson would hit him again or take his gun, and opened fire as the 19-year-old continued to come at him.

Due to a Wisconsin law, state authorities participated in the investigation by the Dane County District Attorney's Office.

In May 2015, Dane County District Attorney declined to bring charges against Officer Kenny.

After Robinson's death, both the cop and the victim received scrutiny of their past.  It was noted that Officer Kenny had previously killed a man, Ronald Brandon, in 2007; he was exonerated and received a commendation.  It was also noted that Robinson, Jr. pleaded guilty to charges of armed robbery in 2014.

The Robinson family on Wednesday August 12, 2015, filed a federal civil rights lawsuit, accusing the officer of acting unconstitutionally and lying to investigators.