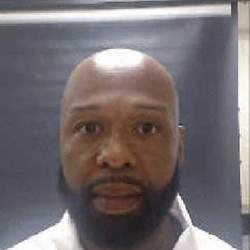 Police say officers were on the lookout for Wyatt, who was believed to be in the Tampa area and wanted for a killing near Atlanta. A police statement says an officer spotted Wyatt's vehicle, began a pursuit and that chase ended with Wyatt firing on the officer.

It says a police helicopter continued tracking Wyatt and directed patrol officers to him. Police say Wyatt got out of his vehicle and began firing at officers and tried to carjack a woman when four officers fired at him.