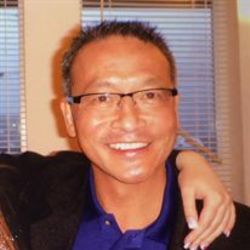 The January 2 killing of Elliott, 53, is the strange case of a man who reportedly attempted to kill himself, failed, and ended up being killed by a Mason County Sheriff’s deputy.

Daughter Megan Elliott, 18, called 911 around 9:30 p.m. to report that her father, a pharmaceutical salesman, had shot himself, according to a follow-up report by Detective William Adam. Sergeant Trevor Severance and Deputy Sheriff Alfonzo Mercado responded to a residence in the 600 block of East Island Lake Drive, a rural area north of Shelton, where Elliott was aiding her wounded father.

Severance, a trained Emergency Medical Technician, entered the residence with medical gear. But he and Mercado discovered that the bullet Elliott fired had only grazed his ear. Elliott greeted them with a .357 in his hand. At close range, he had clear shots at the deputies and held his gun menacingly. Severance and Mercado drew their weapons and began shouting for Elliott to drop the .357. (Megan Elliott had not hung up after the 911 call, and dispatchers were still on the line. The deputies’ commands can be heard on the recorded audio.) He refused to discard his weapon, investigators say. The seconds ticked past.

“When Tim Elliott threatened to take the life of one of the deputies,” Det. Adam reports, “Severance was provided no other choice but to discharge his weapon, striking and mortally wounding Tim Elliott.”

Having failed to shoot himself, Elliott may have decided to commit suicide by cop. Or he simply wasn’t making rational decisions: His family told police he was taking medication for severe depression.

After a review, including an investigation led by the neighboring Grays Harbor County Sheriff’s Office, Mason County Prosecutor Mike Dorcy concluded that Severance had followed the law. Mason County Sheriff Casey Salisbury called the sergeant’s actions courageous. Shortly after Elliott’s death, daughter Megan said on Facebook, “I know you all will be seeing stuff on the news. My best friend in the whole world and the best person I will ever know, my father, went up to heaven today. I love him more than anything in the world.”