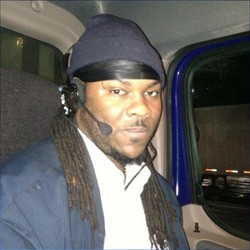 According to police, as they tried to serve an arrest warrant at a home outside of Atlanta, Tierre Guthrie became combative and both sides started shooting, resulting in the death of an officer and Guthrie.

Locust Grove Police Officer Chase Maddox died of a gunshot wound to the head Friday, the Georgia Bureau of Investigation said in a statement, citing results of an autopsy conducted Saturday. The autopsy showed Maddox, 26, had been shot three times.

The suspect, Tierre Guthrie, 39, also died. An autopsy showed that he was shot four times, with two wounds to the chest.

Two Henry County sheriff's deputies were wounded. One was released from the hospital and a second was in stable condition after surgery.

Gunfire broke out as the officers were serving an arrest warrant at Guthrie's home in Locust Grove, about 40 miles (65 kilometers) southeast of Atlanta, the GBI said. Guthrie was wanted for failing to appear in court for traffic violations.

"Guthrie became combative and escalated the situation," the agency said in a statement late Friday night. The deputies called Locust Grove police for backup, and Maddox arrived within minutes. "A fight ensued resulting in Guthrie and the officers firing their weapons," the GBI said.