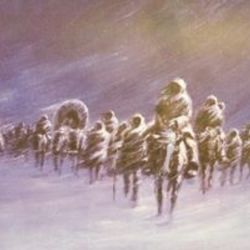 The Long Walk of the Navajo, also called the Long Walk to Bosque Redondo, was an Indian removal effort of the United States government in 1863 and 1864. Early relations between Anglo-American settlers of New Mexico were relatively peaceful, but, the peace began to disintegrate following the killing of a respected Navajo leader by the name of Narbona in 1849. By the 1850s, the U.S. government had begun establishing forts in Navajo territory, namely Fort Defiance (near present-day Window Rock, Arizona) and Fort Wingate, in northeast New Mexico. Further, the Bonneville Treaty of 1858 reduced the extent of Navajo land, and the relatively pro-Navajo local U.S. Army leader and Indian agent was reassigned to West Point.

By the 1860s, as more and more Americans pushed westward, they met increasingly fierce resistance from the Mescalero Apache and Navajo people who fought to maintain control of their traditional lands and their way of life. Under the leadership of the new commander of Fort Defiance, William T. H. Brooks, the Navajo and the U.S. Army began a destructive cycle of raids and counter-raids culminating in the near-sacking of Fort Defiance by approximately 1,000 Navajo warriors under the leadership of Manuelito and Barboncito on April 30, 1860.

Despite another treaty signed on February 15, 1861, relations quickly got worse when a dispute over a horse race of questionable fairness resulted in the massacre of 30 Native Americans on the orders of Colonel Manuel Chaves, commander of Fort Wingate. Following this massacre, which took place on September 22, 1861, military leaders began drafting plans to send the local Navajo on the Long Walk.

Originated by General James H. Carleton, New Mexico's U.S. Army commander, the plan called for the removal of the Navajo from their native lands, including areas in northeastern Arizona, through western New Mexico, and north into Utah and Colorado.

To accomplish their plan, the U.S. Army made war on the Mescalero Apache and Navajo Indian tribes, destroying their fields, orchards, houses, and livestock. Before the Indians were even defeated, Congress authorized the establishment of Fort Sumner, New Mexico at Bosque Redondo on October 31, 1862, a space forty miles square.

Though some officers specifically discouraged the selection of Bosque Redondo as a site because of its poor water and minimal provisions of firewood, it was established anyway. It was to be the first Indian reservation west of Oklahoma Indian Territory. The plan was to turn the Apache and Navajo into farmers on the Bosque Redondo with irrigation from the Pecos River.  They were also to be "civilized” by going to school and practicing Christianity.

The Apache and Navajo, who had survived the army attacks, were then starved into submission. During a final standoff at Canyon de Chelly, the Navajo surrendered to Kit Carson and his troops in January 1864. Following orders from his U.S. Army commanders, Carson directed the destruction of their property and organized the Long Walk to the Bosque Redondo reservation, already occupied by Mescalero Apache.