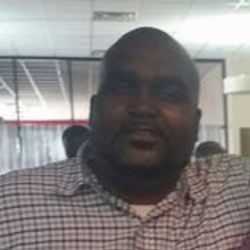 40 year-old Terence Crutcher whom family say was unarmed, was fatally shot by police who were investigating the his stalled car in the middle of the street.

The Tulsa Police Department plans to release unedited video of a man who was fatally shot by a Tulsa officer, and they've contacted the Department of Justice to assist in the ongoing investigation.

Terence Crutcher, 40, died after he was shot Friday night by a Tulsa officer near 36th Street North and Lewis Avenue, where his SUV was stalled in the street. His family, and an attorney representing the family, said during a press conference Saturday they wanted police to release the video immediately and sought a transparent investigation.

An attorney for the family of a man who was fatally shot by a Tulsa Police officer Friday night called for the Tulsa Police Department to "immediately" release any video footage it has of the incident.

Tiffany Crutcher said there is "a lot of speculation" about what happened but maintained that "one fact I do know is that my brother was unarmed." Police have declined to say whether they found a weapon anywhere near Terence Crutcher and have set a news conference for 1:30 p.m. Monday.

The news release did not identify the officer who shot him.

One eyewitness who spoke to Fox 23 in Tulsa communicated that everything about what the police have said happened is inaccurate. She said that Crutcher had his hands in the air and was walking very slowly and carefully, fully aware that being in the presence of police was dangerous, when he was shot and killed. Crutcher's relatives say he was unarmed.

More than a year after being acquitted of first-degree manslaughter, one former Tulsa, Oklahoma police officer Betty Shelby is teaching officers how to survive "The Ferguson Effect," or what she calls the after-effects of being accused of shooting an unarmed suspect.

The Tulsa Police Department released the names of police officers involved in a deadly shooting on Friday, September 16, 2016. Officer Betty Shelby is the officer who fired her weapon, killing Terence Crutcher.

Officer Tyler Turnbough deployed his Taser during the incident.

September 2016 Tulsa Police Chief - there was no gun!

Within a week of the shooting, Tulsa District Attorney Steve Kunzweiler filed a “heat-of-passion” manslaughter charge against officer Betty Shelby, after cameras filmed her shooting Crutcher as he stood beside his stalled SUV.

Shelby “reacted unreasonably” and became “emotionally involved to the point that she overreacted,” the prosecutor’s office said in an affidavit.

She was formally arrested and booked into the Tulsa Jail at 1 a.m. Friday, September 23, 2016 according to county records. She posted a $50,000 bond and was released from jail 20 minutes after she was booked.

September 2016 Betty Shelby is pleading not guilty in the fatal shooting of Terence Crutcher, for which she has been charged with first-degree manslaughter

May 2017 Tulsa prepares for manslaughter trial

May 2017 Killer cop found not guilty of manslaughter

On October 27, 2017 ruling on a request by the officer in question, a judge ruled that the first-degree manslaughter case brought against a former Tulsa police officer will be removed from her record.

In April 2018, the estate of Terence Crutcher filed a new wrongful death lawsuit in Tulsa County District Court against the city of Tulsa related to his 2016 shooting death. Family attorneys said in a news conference that Crutcher’s parents, according to state law, are not legally entitled to make a damage claim in the previously filed federal case against Shelby, the city of Tulsa and Chief Chuck Jordan. However, Oklahoma’s civil procedure statute on wrongful death claims indicates a family can file suit to recover damages for grief and loss of companionship for the children and parents of a decedent.

On March 1, 2019, the New York Times reported that the Justice Department said it had “found insufficient evidence to prove that the officer's use of force against Mr. Crutcher was ‘objectively unreasonable’ under the definition set by the United States Supreme Court,” and that Officer Shelby will face no charges.

September 2016 School children react to death of father of classmates

May 2017 Disability aspects of Terence Crutcher

May 2017 Community meets to say #BlackLivesMatter

The family of Terence Crutcher vowed to file a civil lawsuit “very soon,” both for compensation and to try to ensure police reforms.

At a Thursday morning press conference, Crutcher’s family members and their attorneys, Damario Solomon-Simmons and Benjamin Crump, and area pastors not only questioned Tulsa police investigators’ handling of the shooting by Officer Betty Shelby but also the department’s police practices in general.

Several speakers said calls by city and law enforcement leaders to “move forward” the day after Shelby was acquitted fail to address the deep sense of injustice many in their community are feeling about the outcome.