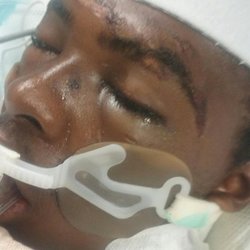 Tawon Boyd was injured in the confrontation Sunday morning, authorities said, but they did not provide details. An attorney for Boyd’s family said his kidneys and heart failed.

An autopsy is to be performed to determine the cause of death, authorities said, and the county police and fire departments are conducting internal investigations.

Police say officers who were called to the first block of Akin Circle in Middle River just after 3 a.m. Sunday arrived at a chaotic scene. They said Boyd’s girlfriend had called 911 and said he was acting “crazy.”

Boyd tried to run to different police cars and get inside and was banging on neighbors’ doors, according to police and his grandmother.

According to the medical examiner’s office, Boyd died from multiple organ failure which was likely caused by a drug commonly called ‘bath salts’.