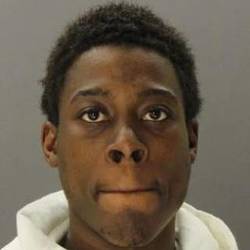 A 23-year-old man was fatally shot by police after he reportedly ran over an Arlington officer twice Wednesday night, police said Thursday.

The female officer, a 14-year veteran, was conducting a traffic stop at 11:38 p.m. at the 1700 block of Spring Lake Drive when she noticed the driver, Tavis Crane, had warrants out for his arrest, an Arlington police news release said. Four people were in the car at the time.

Crane had a felony warrant from Dallas County for a probation violation of evading arrest. and multiple misdemeanor warrants out of Grand Prairie, police said.

Records show that Crane had addresses in both Arlington and Grand Prairie. He has been arrested several times since 2011 in connection with a variety of offenses, from possession of marijuana to aggravated assault, records show.

The patrol officer called for backup after stopping Crane on Wednesday night, and two additional units responded. When the officers approached Crane to arrest him, he refused to comply and put his car in reverse, hitting the female officer and slamming into her patrol car, police said.

In an attempt to get the the suspect to stop, one of the backup officers then got into Crane’s car from the rear passenger door and shot him.

Crane pulled forward, again running over the female officer, as he tried to flee, but his car came to a stop at the end of the road, police said. Officers tried to help the suspect before he was taken to Arlington Memorial Hospital, where he was pronounced dead at 12:31 a.m., according to the Tarrant County medical examiner’s website.

Two other adults and a toddler inside the suspect’s car were not injured. Police are interviewing the two adults to determine the extent of their involvement. The child was released to other family members.

The female officer was taken to John Peter Smith Hospital in serious condition with several broken bones but is expected to recover, police said.

A federal appeals court is allowing a civil lawsuit to proceed against an Arlington police officer accused of excessive force for fatally shooting Crane in 2017..