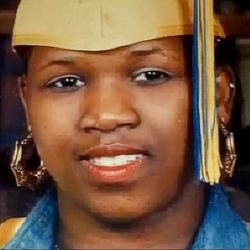 A 37-year-old schizophrenic woman died after police slammed her to the pavement outside her family's home, her brother said. Tanisha Anderson was pronounced dead at Cleveland Clinic early Thursday after an altercation with officers nearly two hours earlier on the 1300 block of Ansel Road.

Anderson was diagnosed as schizophrenic and bipolar. Her family called 911 in the hopes of getting assistance for her; she had attempted to leave her home late in the night wearing nothing but a nightgown on two occasions. Police say they spoke with Anderson and convinced her to be escorted to a local hospital. As she was being taken to the police squad car, Tanisha’s family says she changed her mind. She sat herself in the backseat but became nervous about the confined space and tried to get out, Anderson said.
Police struggled to keep her in the car and an officer eventually drew a Taser. Joell Anderson said he begged the officer not to use the weapon on his sister.Police say she began to “actively resist” them. At some point during the struggle, they claim she went limp, and they called EMS after it was discovered her pulse was low. Family members describe a much different scenario—one depicting excessive force, with officers employing a takedown move and applying pressure with their knees on her head to keep her from further resisting arrest. That “resistance” cost Tanisha her life. Her death was ruled a homicide and an investigation into the case is now concluded. Tanisha Anderson died as a result of being physically restrained in a prone position by Cleveland police on Nov. 13, the Cuyahoga County Medical Examiner's office announced Friday.

Tanesha’s 16-year-old daughter watched the scene from inside her home, and corroborated Joell’s version of the story. “I am hoping for a change in the police system,” she told Cleveland.com.

“If they have a job to protect people, that’s what they should be doing.”

Two Cleveland police officers, Scott Aldridge and Bryan Meyers, had been placed on restrictive leave while the matter was being investigated.

It's apparent from published reports that the law enforcement officer treated the mental health patient like he was trained to treat citizens accused of violating laws and ordinances. He didn't have the legal authority to convert the use of the police to car to an ambulance to take Anderson to the hospital, even if that's what the family wanted. Performing EMS and patient transport duties not only violated his oath of office as a law enforcement officer, it violated the city's labor agreement with its paramedics. He should have said no since Anderson hadn't violated any laws, was not under arrest, and was also protected against being deprived of her constitutional rights because of her disability. The cop's statutory duty was limited to obeying and enforcing ordinances and laws.

It's within the legal duties of a paramedic to transport patients and serve as caregivers. Paramedics are also trained differently than cops to deal with mentally ill patients. A paramedic would have understood her bi-polar and schizophrenic reaction to being confined.

This is why federal intervention is needed, and is perhaps an opportunity for U.S. Department of Justice officials to expand the scope of their existing Cleveland police department investigation.

In December 2014, the Anderson family held a press conference to talk about the need for better management of people with mental illness.

Tanisha's death has been ruled a homicide as of 7.16.2015. On Wednesday, February 17, 2016, Cuyahoga County Prosecutor Timothy J. McGinty's office announced that the Ohio Attorney General's Office would take over the investigation into the Cleveland police killing of Tanisha Anderson.

According to CBS affiliate WOIO, Anderson's family released a statement following the release of the medical examiner's report saying, "The family demands justice for Tanisha, a thorough criminal investigation and an independent prosecutor that results in accountability by the police officers and the Cleveland Police Department."

In April 2016, it was reported that a retired Cuyahoga County judge and court administrator had been appointed as a special master to review evidence in the death of Tanisha Anderson. In May 2016, Special Master retired Judge Thomas Pokorny notified Administrative and Presiding Judge John J. Russo that there was a conflict and asked to be removed from the case. Judge Russo granted the request and appointed retired Judge Joseph Gibson as the new Special Master.

According to an order released late Friday, September 30, 2016, the Cuyahoga County medical examiner would not be allowed to testify in the death of Tanisha Anderson. The order also barred the first page of the medical examiner's findings from being used as evidence.

Russo's order says it's barring the medical examiner's verdict in Anderson's death. The medical examiner deemed her November 2014 death a homicide, a fact that is mentioned on the now-barred first page of the report, but is included in the second page. The email distributed to the media from Russo's spokesman Darren Toms offered no explanation for Russo's decision in the almost two-year investigation. Toms said Russo would not comment further on the order.

A medical examiner's report and testimony are normally regarded as key evidence in criminal cases involving homicide. Dan Tierney, a spokesman for state Attorney General DeWine, said his office would "have to consider" the difficulty of continuing a homicide investigation without a cause of death report after receiving the full investigation.

The Anderson family notified the Court in their civil lawsuit that the parties are in settlement talks.

On Friday afternoon, February 2, 2018, it was announced that a Cuyahoga County grand jury declined to charge two Cleveland police officers in connection with the death of Tanisha Anderson, who died while being arrested during a mental health episode in 2014.