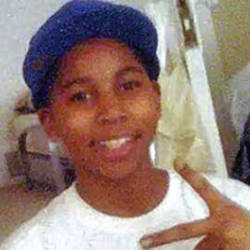 Tamir Rice, 12, was playing in a local park when someone called 911 and reported that a person, "probably a juvenile," was waving a gun around that was "probably fake." Police officers Timothy Loehmann and Frank Garmback pulled up to Rice in their patrol car and Loehmann got out and shot Rice almost instantly.

After initially planning to demolish the park gazebo where Rice was killed, on May 2, 2016, after receiving a request from the Smithsonian Institution in Washington D.C., the city of Cleveland agreed to hold off while the museum discussesd options for preserving the gazebo, given its importance to African-American history.. Days after this story was reported, the museum clarified that It was only trying to help Black Lives Matter, which had expressed interest in preserving the gazebo.

In October 2018, the former Cleveland police officer who fatally shot 12-year-old Tamir Rice was hired by a police department in a small Ohio village.

In July 2022, less than two days after he was sworn in to the post, the former Cleveland police officer who shot and killed Tamir Rice withdrew his application to be the lone police officer in a tiny northern Pennsylvania town, according to a borough official.

No charges had been filed in the case as of July 8, 2015. As Mother Jones first reported six months after the killing, "the Cuyahoga County Sheriff's Department, which took control of the case in January, has yet to interview the two officers in its ongoing investigation."

On June 8, 2015, the New York Times reported that the Rice family might bypass the prosecutors office and attempt to bring murder charges directly On June 11, 2015 a judge found probable cause to charge Cleveland police Officer Timothy Loehmann with murder in the fatal shooting of 12-year-old Tamir Rice last year. However, the court determined that the choice to lodge charges remains with Cuyahoga County and Cleveland prosecutors. The ruling was confirmed on appeal by a Cleveland appeals court.

On Saturday, October 7, 2015, the Cuyahoga County prosecutor published two reports on the Tamir Rice shooting that each concludes that the shooting was justified. The conclusions, reached separately by a retired FBI agent and a Colorado prosecutor.

On October 16, it was reported that Attorneys and family members of Tamir Rice are accusing the Cuyahoga County prosecutor of not being committed to securing an indictment in the case and are asking for a special prosecutor in the case.

On October 27, it was reported that Cuyahoga County prosecutors had begun presenting evidence in the police shooting of 12-year-old Tamir Rice to a grand jury, multiple sources confirm.

Prosecutors in Ohio on Saturday, November 28, 2015 released a frame-by-frame analysis of the surveillance camera footage of the shooting. The enhancement by a video expert will be presented to a grand jury that will decide if then-rookie patrolman Timothy Loehmann or his field training officer should be charged criminally.

Tamir Rice' mother and two of his siblings testified Monday, November 30, 2015 in front of a Cuyahoga County grand jury hearing evidence related to the 12-year-old boy's death at the hands of Cleveland police, according to a statement by her attorney.

In an unsworn statement in November 2015, the responding officer indicated that he and his partner continuously yelled "show me your hands," before and during the shooting.

On December 27, 2015, it was announced that a grand jury had declined to charge the officer responsible for the killing.

On February 10 2016, the city of Cleveland charged the Rice family for the cost of the ambulance that came after Tamir was shot.

On April 25, 2016, the city of Cleveland reached a $6 million settlement in a lawsuit over the death of Tamir Rice. An order filed in U.S. District Court in Cleveland said the city will pay out $3 million this year and $3 million the next. There was no admission of wrongdoing in the settlement.

It was reported on January 16, 2016 that three Cleveland police officers will face administrative charges following an internal investigation into the death of 12-year-old Tamir Rice.

On May 30, 2017, the New York Times reported that the officer who shot and killed Tamir Rice had been fired by the department.

In March 2018, an appeals court ruled that the transcripts of grand jury presentations that resulted in no charges against the Cleveland police officer who shot Tamir Rice should remain secret. A three-judge panel at the Eighth District Court of Appeals ruled unanimously that the Cleveland NAACP did not show that it was entitled to copies of the transcript.

On December 29, 2020, finding a lack of evidence to prosecute, the Justice Department ended a five-year inquiry into the death of Tamir Rice.

The eight activists and clergy members who call themselves the "Cleveland 8" released a video and letter on July 8, 2015 echoing earlier grievances with the investigation in the police shooting of 12-year-old Tamir Rice.

A group of family members and supporters of Tamir Rice marched to a city courthouse Thursday and delivered a petition with 60,000 signatures to the Cuyahoga County Justice Center requesting the prosecutor take action, WKYC reported.

In January 2016, Cuyahoga County Prosecutor Timothy J. McGinty refused a request from the Cleveland branch of the NAACP to release the Tamir Rice grand jury transcripts, saying he would require a court order to do so.

In March 2016 McGinty ousted by voters

September 2016 The gazebo under which Tamir Rice was playing with a toy gun before he was shot and killed by a Cleveland police officer will be deconstructed and sent to a Chicago Museum for display.