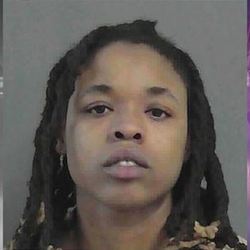 Miles said Officer Jeremy Thompson was inside the store and helped pay for the woman's cigarettes. They walked outside together. Thompson said he smelled marijuana coming out of the woman's car, and he called for backup.

When Officer Joe Yother arrived, they asked Simpson for identification. Miles said Simpson then pulled a gun and fired at the officers. They fired back.

The officers killed Simpson. One of her shots hit Yother on the arm and ricocheted to his chest, but his cellphone absorbed the damage. Yother went to a local hospital but was expected to recover.

Police arrested the other woman on an unrelated charge.

"Our GBI Calhoun office is in the very early stages of this independent investigation," Miles said during a news conference Tuesday evening. "At this point, once the investigation is complete, it will be turned over to the Cherokee Judicial Circuit for review."