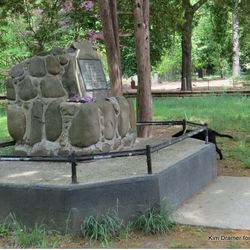 Native Americans, European Americans and African Americans have served as brothers-in-arms since the American Revolution. On August 31, 1778, an area of Van Cortlandt Park in the Bronx now called Indian Field, was the site of a Patriot defeat in the American war for independence. Here, members of the Stockbridge Mohicans, laid down their lives in the Battle of Van Cortlandt Wood, also known as the Battle of Kingsbridge. The Stockbridge Mohicans were Christians who had relocated to Stockbridge, Massachusetts in the Berkshires. The Mohican Indians had served in every major campaign in the eastern theater of the American Revolution beginning with Bunker Hill. The Stockbridge Mohicans were assigned to patrol Westchester Country, including an area that is now part of the Bronx.

Young men of the Mohican and allied tribes saw military service as a natural extension of their traditional role as warriors.  The Stockbridge Indians were among the lightly armed shock troops of the Continental Army. They were known as crack marksmen, and carried firearms, as well as a bow and quiver of arrows, tomahawks and knives.  In July 1778, they ambushed and killed British troops on patrol.  Then, they retreated into the protection of the woods that covered this area of the Bronx.

John Simcoe, commanding the Queen’s Rangers, was determined to avenge the humiliation of this encounter. Simcoe is featured on TURN:  Washington’s Spies, the AMC television period drama about espionage agents who helped turn the tide of the American Revolution.  And yes, Simcoe was ruthless.

Simcoe used the woods and the contours of the land in the Bronx to implement his plan for revenge, positioning 500 men from several units behind small hills in the area. His plan was to entice Patriot troops to move forward, and to use his hidden troops to envelop and entrap them. The Stockbridge Indians were positioned along a trail that still exists today as an unpaved path bordered by native trees. It is now known as DeVoe’s Lane, after the family who owned a farm here during the Revolutionary War.

With enemy troops to their front and rear, the Stockbridge leader, Chief Ninham, refused to surrender.  His men fought hand-to-hand with Simcoe’s troops. Outnumbered, they met their deaths fighting for American independence.

After the battle, the bodies of the Stockbridges lay scattered on the field of battle. Local dogs began to drag human remains into town, horrifying residents. The remains were buried in a mass grave, and a stone mound was erected to prevent further desecration of the bodies.

In 1906, the Daughters of the American Revolution erected a monument at the site with a stone cairn similar to the one that protected the desecrated bodies. A temporary dog park now runs alongside this monument to valor.  Where Patriots once fought and died, Bronx dogs now frolic.

Members of the Kingsbridge Historical Society (KHS) would like to see the monument reflect the honor these Revolutionary War heroes deserve. They point to a dignified monument to World War I soldiers just across the street from the dog run. In contrast, the Stockbridge Massacre monument exhibits flaking paint, weeds and overgrown grass.  The base of the monument is dishonored by the marks of dog urine.

A mingling of races and cultures has come to define us as Americans. The long and continuing struggles for recognition and justice represent the real spirit of American independence. The Bronx, is the place to celebrate our 21st century version of the Red, White and Blue in the story of America.