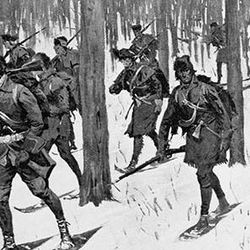 On September 13, 1759, Captain Robert Rogers departed Crown Point with 17 whaleboats carrying 190 raiders to attack the French and Indian staging area at the village of St. Francis near Montreal. He and the rest of Roberts’ Rangers spent the next 10 days slipping past French warships on Lake Champlain. Hiding the whaleboats at Missisquoi Bay they struck out overland. Two days later, breathless guards overtook the column to report that an enemy force had discovered the whaleboats and was in hot pursuit. Undaunted, Rogers dispatched messengers back to Crown Point to report his situation. He decided to continue on to St. Francis, destroy the town, and return by way of Lake Memphremagog in northern Vermont, and requested that supplies be sent to the Wells River.

For nine days, Roberts’ Rangers marched through the knee-deep water of Missisquoi Swamp and slept on tree branches. Twenty-two days after leaving Crown Point, Rogers and his raiders reached the swift-flowing St. Francis River, 15 miles from the enemy camp. The men formed a human chain in order to cross the fast-running water. By dusk, the Rangers had spread out along the crest of the hill overlooking the enemy encampment. Rogers crept into the village and observed that the inhabitants were involved in drunken revelry that would certainly impair their ability to fight in the morning.

In the dead of night on October 6, Rogers ordered his officers and sergeants to awaken the raiders and prepare for battle. He then moved his force to about 500 yards from the village. As muted rays of daylight began to break through the low-hanging clouds, Rogers waved the Rangers forward. About 40 of them sprinted silently ahead of the main strike force to take up positions near the river; their mission was to prevent the enemy from escaping by canoe. The remaining assault force split into three groups to attack the village from different directions. Pulse rates throbbed as Roberts’ Rangers closed in on the objective. Bold momentum ignited as they surged into the enemy camp. A fierce roar echoed from the Rangers as they darted among the lodges where Abenaki Indians and Frenchmen slept off the night’s revelry. Yells of alarm joined the cacophony. Then the village was quickly filled with the smell of burning lodges. The Rangers closed with the enemy and both forces were quickly intermingled in deadly combat.

In a few hours, the fight was over. Rogers rapidly reassembled his Rangers and withdrew from the flaming village. But a large French and Indian force pursued. Bitter winds and freezing rain lashed the Rangers as they raced for the Wells River because, among other things, their food supply was gone. Some Rangers pressured Rogers to stop and stalk for game. Against his better judgment he allowed this force to break up into small groups and hunt for meat. As a consequence, some Rangers were killed or captured by the pursuing enemy.

When Rogers and his exhausted Rangers reached the rendezvous point, they found only the warm coals of a campfire. The fearful resupply force had abandoned the spot only hours before. Rogers realized that his men could go no farther. Whether from starvation, cold, wild animals, or the enemy, they would all die at Wells River unless help came soon. So Rogers, an officer named Captain Ogden, and an Indian boy brought from St. Francis mustered their strength. They built a crude raft and made an arduous journey of 65 miles to Fort Number Four on the Connecticut River. Their arrival started supplies immediately on the way to the starving Rangers.

By early November, word reached Crown Point that Rogers had destroyed the enemy staging area and had returned to Fort Number Four. The news of his victory spread quickly throughout New England, where he was hailed as a hero. The St. Francis Raid and Rogers’ life are well presented in the fictional but well-researched historical novel by Kenneth Roberts entitled Northwest Passage.