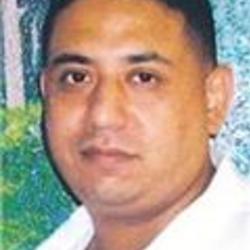 Harlingen police say they arrested Silviano Ortiz, 37, of Harlingen Sunday night at a local donut shop on South 77 Sunshine Strip. Police say Ortiz was seen earlier on the 1500 block of South 77 Sunshine Strip falling on the road and was nearly struck by several vehicles and pulling on vehicle door handles. As officers were arriving to the scene they received a 911 call advising them Ortiz was at the Shipley Donuts. Police said Ortiz appeared disorientated and was bleeding from minor injuries. They say he became combative and was placed inside a patrol unit to be taken to the city jail. According to a department news release, officers say as they approached the jail Ortiz appeared unresponsive. Officers then began providing CPR and he was transported to the hospital where he later died.