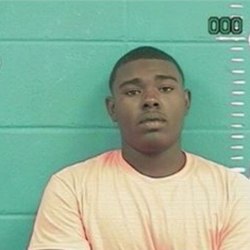 Shawan Allen died after he opened fire on officers entering a mobile home to arrest him near Wesson, about 40 miles (65 kilometers) south of Jackson, Copiah County Sheriff Harold Jones said.

"When you're determined not to go with police when they knock on the door, then whatever happens, that's on you," Jones told reporters.

An officer who was shot in the back while wearing a bulletproof vest was taken to a hospital with what Jones described as a "welt" but was released after being examined.

Allen was one of four men wanted on capital murder charges in the Saturday shooting death of 21-year-old Zariah Antel Newton in nearby Brookhaven. Police say Newton was shot when she and her boyfriend returned home after getting a security alert and found their home being burglarized. Surveillance footage released by Brookhaven police shows men wandering around a darkened house, opening the refrigerator and cabinets.