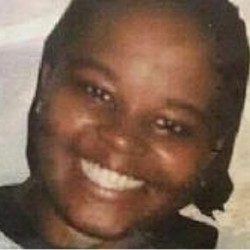 Sharmel Edwards was 49 years old when she was killed on April 21, 2012 in Las Vegas, Nevada. Las Vegas police received a call from Edwards’ boyfriend saying that she had taken his car without permission. (The press ID’d her as a “car thief”.) When Police ordered her out of the car, she stayed in the car for about 30 minutes. Police allege they shot her when she emerged from the car holding a gun and they found a gun near her body. Five officers shot her multiple times. At least three witnesses told reporters that she came out of the car with her hands raised above her head to surrender and they saw no weapon. Witnesses also reported that no officer ordered her to drop a weapon and that after she was shot, witnesses noted that police were laughing and high-fiving each other. Friends told reporters that Edwards was a single mother of two teenagers who worked with disabled children. Friends and witnesses thought she was emotionally distraught. She had had an argument with her boyfriend and that police did not try to “negotiate” with her for the half hour before she exited the car. Rather they yelled commands at her. Las Vegas press has carried a lot of criticism of police in this incident. The District Attorney ruled her shooting “was not criminal.”

Las Vegas cops have a propensity for mistaking cell phones for firearms. When will the U.S. Dept. of Justice start charging, prosecuting and sending these LV Metro killer-cops to prison?

Note that Officer Christopher Grivas killed another person last summer -- and was back on the street, before going through a coroner's inquest hearing to determine whether his actions were criminal or justified.