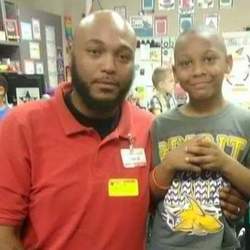 Police Chief Tim Duriso said during a news conference Monday that Shayne Lyons was in possession of a large weapon and failed to comply when an officer told him to drop it. He said the man continued to advance toward the officer with the weapon. He said the officer feared for his life and fired “several rounds.”

Bystanders at the scene told the Enterprise they heard six or seven shots. They also described the weapon as a machete, but officials would not confirm that detail.

Emergency medical services were called immediately following the shooting, but the man died on the scene, Duriso said.

District Attorney Bob Wortham said the dead man was found in possession of cigarettes that tested positive for the drug PCP. He and Duriso declined to provide other new details on Monday, citing the ongoing investigation.

Lyons family members at the news conference could be heard sighing as their questions and those from the media went unanswered. Queries such as, “How many shots were fired?” and “What was the large weapon?” and “Was the officer responding to a complaint?” were met with no-comments such as, “We are not allowed to answer that at this time” and “I can’t comment on an ongoing investigation.”

The officer involved in the shooting also was not identified and is currently on paid leave, which Wortham said is for his protection.