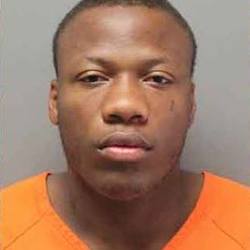 According to State Law Enforcement Division spokesman Thom Berry, the Dorchester County Sheriff's Office responded to a shooting late Friday night. According to a Dorchester County Sheriff's Office incident report, deputies were called to a home on Ridge Road just before 11 p.m. where a man said two black males named "Pookie" and "Rock" followed him home from Carter's gas station and fired multiple shots at him from a maroon Crown Victoria. Deputies later learned that "Pookie" was the alias for Palmer, but they did not learn "Rock's" real name. The victim told deputies he did not wish to press charges and would not tell them why he thought he was targeted. A short time later, a South Carolina Highway Patrol Trooper tried to stop a vehicle that happened to be the one wanted in connection to the shooting call. Berry said that vehicle did not stop, which led to a chase through parts of Dorchester County. At one point in the chase, the suspect slowed his vehicle down long enough to let two people jump out of the car. That's when the driver fired a shot at the Trooper's car, Berry said. The Trooper took into custody the two people who got out of the car while Dorchester County deputies kept following the car. Berry said during the chase, the suspect crashed his car on Schultz Lake Road, colliding with a tree and a house. Palmer got out of the car and appeared to have a weapon, officials said. Deputies ordered Palmer to drop the apparent weapon. However, he didn’t obey deputies commands. Deputies fired, striking Palmer, who was later pronounced dead at the scene.