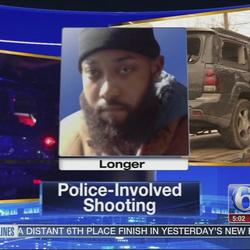 33-year-old Shalamar Longer was killed On February 8, 2016 when officers attempted to pull him over for a defetive license plate light leading to a car chase.

The incident began at 2:13 a.m. Monday in Upland Borough, when an officer tried to stop a 2004 Chevrolet Blazer driven by Longer of Chester for a burned out license plate light.

Instead of stopping, police said, the Blazer took off, leading police on a chase through Upland Borough, onto I-95, then into Chester via the Highland Avenue exit.

It ended about 6-10 minutes later in the 1200 block of Keystone Road, Whelan said, when Shalamar jumped out of the SUV, pulled out a loaded gun and pointed it at police.

Six officers drew their weapons and fired about 100 rounds, killing him.

Asmar Longer, Whelan said, jumped out of the passenger side of the Blazer in an effort to avoid the confrontation with police