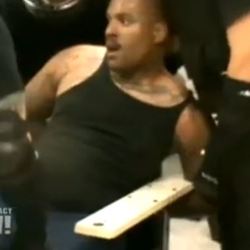 The circumstances surrounding the death of a Fort Bliss soldier at the El Paso County Jail are under investigation by the District Attorney’s Office.

Sgt. James Brown, 26, of Fort Bliss, voluntarily checked into the county jail the evening of July 13. He reported to serve two days of a driving while intoxicated sentence. His family said he was instructed by the court to check in at 8 p.m. and that he would be released on July 15.

Instead, Brown’s family said the soldier died while in jail custody July 14 after being given an injection apparently intended to sedate the man, whose family said was not a combative individual.

Brown’s mother, Dinetta Robinson Scott, drove from her home in San Antonio upon word from hospital doctors that Brown’s kidneys and liver had shut down and that he was bleeding from the mouth, ears and nose within 45 minutes of the injection. Brown died shortly after at the hospital.

Brown’s wife and mother said he lived a healthy life, and the family has retained an attorney, B.J. Crow, who says medical tests on Brown’s body at the hospital came back negative for the presence of narcotics and alcohol. Crow said that in all his years in litigation, he has never seen anything like it.

“What is so unusual is when a 26-year-old active military person checks into jail for a court-imposed sentence on a Friday and he leaves Sunday in a casket. Something went horribly wrong there,” Crow said.

Brown’s mother said her son was immediately concerned upon checking in, because of what appeared to be a paperwork problem.

“I don’t have all the details as to what happened with the paperwork,” Scott said. “All I know is he said, ‘They’re trying to make me stay seven days instead of two days, so I just want to pay the court fine and get out of here.'”

Scott said she arranged to have the money sent to the jail immediately Saturday morning, and within hours, her son was dead.

The El Paso County Jail said it does not publicly announce or advise the media of deaths in the jail unless a request for information is submitted about a particular incident. When pressed about the death of Brown, the County Jail gave no comment to KFOX14 News, but instead posted a brief statement on its government website stating:

“James Brown turned himself in for a DWI Commitment. While in custody, he required medical treatment and was transported to University Medical Center where he later died. Pursuant to state statutes and regulation, the case is under investigation by the El Paso County Sheriff’s Office, District Attorney’s Office, and under review by the Texas Commission on Jail Standards. Results from the autopsy, including toxicology, are pending.”

KFOX14 is also pressing for answers from the Texas Commission on Jail Standards.

Meanwhile, Brown’s family said that after two combat tours in Iraq, Brown was prescribed a sleeping aid, but refused to take it and never suffered from any allergic reactions to medications before or experienced any medical conditions. The family is demanding answers about what happened, what exactly was put into his system and why.

Brown leaves behind a wife, a 2-year-old daughter, a 9-year-old stepson and his mother, who raised him alone. He had no siblings. He will be buried in Riverside California at Riverside National Cemetery on Saturday.