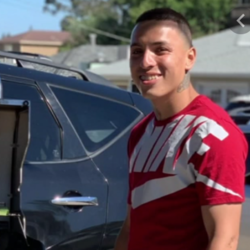 Sean Monterrosa, a 22-year-old man was in a half-kneeling position when an officer in a Bay Area city fatally shot him through a police vehicle's windshield, police said Wednesday.

Sean Monterrosa, 22, of San Francisco, was outside a Walgreens in Vallejo, California, shortly after midnight Tuesday when police responded to a report the store was being looted, police said.

Monterrosa began running toward a car, and then stopped, crouched down in a half-kneeling position facing officers, authorities said. He had in his sweatshirt pocket a hammer. Police thought it was a gun and that he was kneeling "in preparation to shoot."

Monterrosa reached for his waist area, police said, and an officer in a police vehicle shot him five times through the windshield, striking him once.

He was taken to a local hospital, where he died of his injuries. The officer who fatally shot him has been placed on leave, police said, and the incident will be investigated by the Vallejo police and the Solano County District Attorney.

The police union filed for a restraining order to block the release of the officer's name who fired the shot.

Touro University in Vallejo announced they would no longer be allowing the Vallejo Police Department to train on their campus.

In July 2020, District Attorney Krishna Abrams announced that she had recused herself and her office from investigating two deadly police shootings in Vallejo involving the deaths of Sean Monterrosa and Willie McCoy.

A second Vallejo police lieutenant is on paid leave in connection with the destruction of a police-truck windshield in the wake of a deadly shooting by a detective, sources told KTVU. Lt. Fabio Rodriguez, who oversees the detective division, was put on leave by Vallejo Police Chief Shawny Williams.

On August 6, 2020, the family of Sean Monterrosa sued the city and the officer involved.