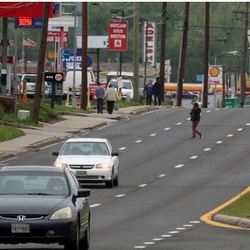 The pedestrian struck by a Prince George’s County police cruiser on University Boulevard last Sunday has been identified.

A marked cruiser struck him around 2:30 a.m. July 17 in the 2000 block of University Boulevard as the cruiser approached Riggs Road.

Police said Romero was was not on a crosswalk.

Two other drivers nearly struck him before the police cruiser did.