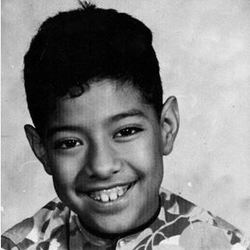 Santos Rodríguez, whose death at the hands of a policeman caused a riot, son of David and María (Bessie) García Rodríguez, was born in Dallas, Texas, on November 7, 1960. After his father, an undocumented Mexican immigrant, was deported to Mexico, his mother was sentenced in July 1971 to five years in prison for murder. Santos and his older brother, David, were put in the care of their elderly foster grandfather, and their younger siblings were placed in other foster homes. Shortly after 2 A.M. on July 24, 1973, Dallas patrolman Roy Arnold saw three boys fleeing from a darkened service station where a soft-drink machine had just been burglarized. Arnold thought he recognized two of the youths as the Rodríguez brothers, who had been in trouble with the law on previous occasions. Arnold and patrolman Darrell Cain drove to the boys' home and awakened their foster grandfather, who spoke little English. The brothers were handcuffed and taken to a vacant lot behind the gas station for questioning. David was in the rear seat with Cain; Santos was in the front seat with Arnold. According to court testimony, after both boys denied knowledge of the burglary, Cain pointed his revolver at the back of Santos's head and urged him "to tell the truth." The boy repeated that he knew nothing; the gun clicked, but did not fire. According to testimony, when Santos reiterated his innocence, Cain warned that the gun contained a cartridge, then spun the cylinder and again squeezed the trigger. The revolver fired, instantly killing the youth. Newspaper accounts headlined that the fingerprints of the Rodríguez boys did not match those taken at the scene of the burglary; nor was any firm evidence subsequently found to link the youths with the incident. A "March For Justice" commemorating Santos Rodríguez was held in downtown Dallas on July 28, 1973. Violence erupted in the late afternoon, causing widespread property damage; thirty-eight arrests were made, and five policemen required hospital treatment. Cain was tried after a change of venue in Austin in November 1973. His defense contended that he had believed his gun to be empty and had reloaded it immediately after the shooting. He was convicted of murder with malice and sentenced to five years in prison. The brevity of his sentence became an issue in the community, but an attempt in 1978 to have the Justice Department review the case failed. Two popular songs later recounted the Santos Rodríguez story: "Los Hermanitos Rodríguez" and "El Chicanito Sacrificado."