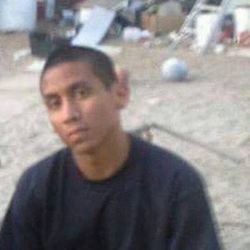 According to police, Samuel Villarreal, 18, gunned his car in reverse and rammed a police car, prompting at least one officer to open fire. About 1 p.m. Wednesday, Indio police officers working on a vehicle theft investigation spotted a vehicle that had been reported stolen and followed it into a parking lot in the 81-900 block of Shadow Palm Avenue, sheriff’s spokesman Armando Munoz said. As the officers moved in to make an arrest, Villareal accelerated the vehicle in reverse and hit the officers’ vehicle, the spokesman said. At least one officer opened fire, striking Villareal an undisclosed number of times, sheriff’s officials said. Villareal was taken to a local hospital, where he died.