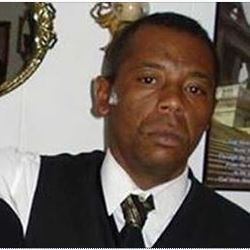 Virginia State Police are investigating after a South Hill man with schizophrenia was Tased three times, according to a family member who says she witnessed the altercation at a local gas station.

Jones' mother, Violet Smith, says she had to give doctors permission to take him off life support Tuesday night.

"I got a call later that evening, and they told me they had my boy on a ventilator… that he was unconscious and that he was gone," said Smith.

A relative of Jones signed an emergency custody order for law enforcement to take him into custody and transport him to the hospital last Friday afternoon. Smith says he had not taken his medicine for about a month. She says her son can have episodes of agitation and hallucinations, if he’s not taking his medicine.

The relative who witnessed the altercation, who did not want to identified, says Jones refused to get out of his car at the E-Z Stop gas station, after officers tracked him down. Jones was driving alone. She says she saw four to six officers and deputies at the gas station. The relative says officers broke two car windows to pull Jones, who weighed about 145 pounds, from the car. She says Jones was resisting and fighting back. The woman says at least one responding officer on the scene was familiar with Jones, since he had dealt with him previously and knew of his condition.

Smith says local police have also taken her son to the hospital previously.

"They knew my boy had a problem. They didn't have to do my boy like that though."

The relative and another witness tell NBC12 the officers drew their guns. The relative says she yelled to the officers that Jones was sick, and not to Taser him. She says Jones was Tased three times and then appeared to have a seizure-like episode.

"…They could have just knocked him down or even if they have to sit on him and handcuff him...but to Tase the boy three times...He was a mental health patient," continued Smith, of the incident described to her by her relative.

Jones was then transported to the hospital, where Smith says he passed away Tuesday night.

At approximately 2:40 p.m. Friday, the Mecklenburg County Sheriff’s Office was following up on an Emergency Custody Order (ECO) requested by a family member for Sabin M. Jones, 44, of South Hill, Va. A family member advised the deputies that Jones was at a convenience store/gas station in the 800 block of North Mecklenburg Avenue in the town of South Hill.

The deputies located Jones inside a late-model Chevrolet Camaro at the convenience store/gas station. When the deputies approached him to serve the ECO, he refused to exit his vehicle. He backed into one of the deputies’ vehicles and then began driving forward, at which time additional deputies, with the assistance of South Hill Police, were able to block the Camaro from leaving the parking lot.

Despite the deputies’ and officers’ repeated attempts to talk to Jones and have him exit his locked vehicle, he refused and became increasingly agitated. To prevent Jones from harming himself inside the vehicle, a deputy broke open one of the vehicle’s windows and negotiations continued with Jones in an attempt to calm him down and get him to safely exit the Camaro. When Jones began kicking and punching the inside of the Camaro, a deputy broke open a second window on the car. Jones then exited the vehicle in an aggressive manner towards the deputies and officers. As the deputies and officers attempted to apprehend Jones, he became increasingly combative. One of the South Hill Police Officers deployed his Taser to bring Jones under control. After the deployment, Jones remained non-compliant with the deputies’ and officers’ commands as they attempted to handcuff him. Jones also began banging his head against the ground.

Due to Jones’ heightened state of agitation and contact with the Taser, he was transported to VCU Health Community Hospital in South Hill. The hospital then transferred Jones to the VCU Medical Center in Richmond, where he passed away Tuesday, Jan. 24, 2017. His remains were transported to the Office of the Chief Medical Examiner in Richmond for autopsy and examination.

At the request of Mecklenburg County Sheriff R.W. “Bobby” Hawkins Jr. and South Hill Police Chief Stuart Bowen, the Virginia State Police is investigating the incident. The investigation remains ongoing at this time.

Sergeant Kevin Carroll, president of the Virginia Fraternal Order of Police, says Tasers are not intended to be lethal. Carroll says it's not known what threat Jones may have posed to the officers or himself, as they were trying to restrain him.

"If the person, when they are being taken into custody, tried to take an officer's weapon, that could potentially be a dangerous situation… where the person could hurt the officer, himself or someone else... I'm not saying that's what happened in this case. But when people are off their medication, they are unpredictable," said Carroll.

"These people who did this to my child...they get to go home to their kids," said Smith through tears.