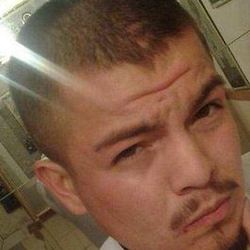 Police said the shooting on Tejon Street near West Elk Place is unrelated to an earlier shooting that also killed the suspect.

Police say four officers were trying to serve a suspect who was a fugitive with felony warrants; the cause of the shooting is under investigation.

A witness said the suspect was attending a funeral at the Romero Funeral home. Police did not confirm that account.

Officers swarmed the scene. Funeral attendees angry at the shooting swore and scuffled with officers and one officer was slightly injured, police said.

Earlier Wednesday, a Denver police officer shot and killed a suspect during an undercover drug operation. That shooting remains under investigation.

Police commander Matt Murray said he couldn't remember having two cop shootings in one day. "Certainly this isn't something we want to have happen."

Outside the funeral home David Sandoval said he felt "disrespected" by the police, adding that he was angry at officers "for taking another life from us today while we're mourning a life that's been lost already."

February 2016 The Denver Police Department has determined that four officers used appropriate force and tactics and followed department policies in July 2014 when they shot and killed Ryan Ronquillo in a crowded funeral home parking lot in southwest Denver.

On December 18, 2017, the 10th Circuit Court of Appeals upheld a lower court decision dismissing the lawsuit by the family of Ronquilo. The court decision said Ronquillo posed a mortal threat to several officers on July 2, 2014, when he began to back up in attempt to flee officers outside the Romero Funeral Home.