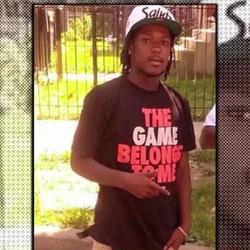 Roshad McIntosh - age 18 - was gunned down by CPD at approx 7:20 p.m. on August 24, 2014 in the vicinity of Polk Street and California Avenue on Chicago’s West Side. Police say Roshad was pointing a gun at officers. Roshad's community tells a vastly different story.

Two Chicago police officers changed their accounts of the shooting after viewing police surveillance video that showed they were not as close to the shooting as they had said, court records show.

The altered accounts raised doubts about the official narrative of the shooting of 19-year-old Roshad McIntosh, who police said pointed a gun at an officer before he was shot. The investigation of the case was reopened in the Summer of 2017.

The commanding officer at the scene, Sgt. Nicola Zodo, told detectives that night — and IPRA investigators later — that he was behind the house in an alley in his squad car when he heard shots and rushed on foot to the porch to order McIntosh to drop a gun and handcuff him, records show.

But Zodo later said under oath that the video — which he did not know existed until he met with his attorneys to prepare for his deposition — indicated his squad car was in front of the house when the shots were fired, suggesting he would have taken longer to reach the porch than he’d said earlier.

The video did not capture what happened behind the house.

Officers had received a tip from an informant that the men on Polk Street had guns, and eight officers pulled up just after 7 p.m. Video from the police surveillance camera shows the officers piling out of the cars, some with guns drawn. Seconds later, McIntosh bolted around the house to the backyard, with officers on his heels as other cops sprinted through the vacant lot next to the house.

Slechter, who joined the force in 2005, said in official interviews and a deposition that he saw McIntosh holding a pistol as the teen entered the backyard and ran up the porch steps. McIntosh ignored orders to drop the gun, Slechter said, and pointed it at him from the elevated porch landing. Slechter fired three times, with one shot hitting him in the heart, according to the autopsy.

Police said they recovered the 9mm pistol near his body, though an Illinois State Police inspection found no usable fingerprints, a report shows.

Toxicology tests found no substances in McIntosh’s system, according to records from the Cook County medical examiner’s office.