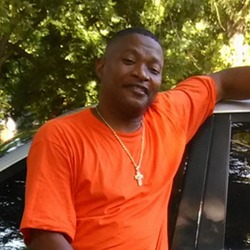 A Greenville man is dead after he opened fire on police Saturday night.

Greenville Police Chief Delando Wilson told the Delta Democrat Times' Mary Alford that officers responded to 309 Neff St. Saturday on a call of shots fired. They knocked on the suspect's door and he walked out of his home firing a handgun, Alford reports.

Washington County Coroner Methel Johnson identified Ronnie Lee Shorter, 44, as the deceased. She said it appears that he was shot five times. He was pronounced dead at the scene at 9:53 p.m.

Mississippi Bureau of Investigation spokesman Warren Strain said the body has been sent to the medical examiner's office for autopsy, and the autopsy should be done early this week.

MBI is conducting an investigation and interviews will continue this week with the officers involved. The police chief has collected their weapons and they will be submitted to the crime lab for processing as part of the investigation, Strain said.

Johnson said she has reached out to the chief of police and the attorney general's office regarding the lack of information she's been given so far by Greenville police on the case.

The officers involved in the shooting were not injured and, per protocol, have been placed on paid administrative leave pending the outcome of MBI's investigation.