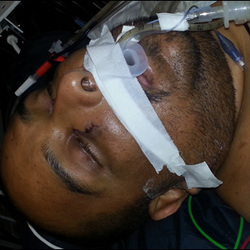 On Monday, Aug. 19, Ronnie Ledesma was arrested outside of a Walgreens store in Bakersfield after Kern County sheriff’s deputies responded to a call about two men acting strangely.

Ledesma’s family, however, was not notified about what had happened to the father of four, until they received a call from Kern Medical Center informing them that he was in critical condition.

"All we know when we get there is that he's been there for close to a week and the family has not been notified. They only notified us when he was in critical condition," Ledesma's son-in-law, Joe Gomez, told KGET News.

According to the Sheriff’s department, Ledesma resisted arrest, and deputies then used a K-9 unit, batons and control holds to subdue him. During the altercation, Ledesma was bitten by a police dog, and was later taken to the hospital, where the Sheriff’s office said he developed medical complications.

On Aug. 28, nine days after his run in with the deputies, Ledesma died.

Ledesma’s family questions whether the autopsy will present an accurate picture of what happened to the man they loved.

The family’s suspicions may be justified given that the Kern County coroner also happens to be Sheriff Donny Youngblood, whose department has seen no shortage of controversial incidents in recent years, some of which would seem to follow a familiar pattern.