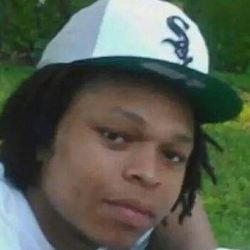 RONALD JOHNSON was known in his neighborhood as RonnieMan. He was also called "the dog man," a name he got from caring for wounded or stray dogs that turned up near his home in Washington Park. He was 25 years old and a father of five small children, ranging in ages from one to seven years old.

Shortly after midnight on October 12, his life was stolen by Chicago police.

Dorothy Holmes raised Ronald and his two sisters as a single parent with the help of her mother and other relatives. Now she is marching every chance she gets against police murder, along with helping to raise her grandchildren. "He was just a loving and caring person," Holmes says.

Ronald's children miss their father and have a lot of questions, being unable to understand why police would take their father away from them.

On the night in mid-October, Ronald had been with his cousin and other friends when he came across flashing police lights. He recognized a Chicago police presence in his neighborhood as a danger, so began to run. Plainclothes officers ran after him and opened fire.

Witnesses have told Dorothy Holmes that the officers didn't identify themselves, and that Johnson stopped and asked why they were shooting at him. When he received no answer, he turned and continued running. Police shot him as he fled--his death from multiple gunshot wounds has been ruled a homicide.

Police later claimed that Johnson "fit the description" of a suspect in a shooting earlier in the evening, and that a gun was found near Johnson's body. But these claims are routine in Chicago police killings, and witnesses say Johnson was unarmed.

December 2015 No charges for officer