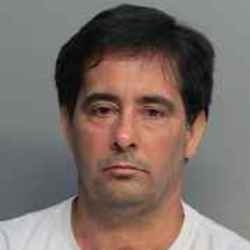 Miami-Dade Police confirmed two officers were involved in the shooting. The officers involved and the suspect have not been identified.

Detectives say the suspect stole an SUV from the Palmetto57 Volkswagen dealership located on Northwest 168th Street and 57th Avenue.

Police said officers tried to pull over the driver but he refused to comply.

Witnesses told NBC 6 officers tried to get the driver to roll the window down, but the man refused. The two officers then used a baton to smash the driver's side window to make contact.

Witnesses said that's when the man puled out a weapon in front of the officers, forcing the officers to open fire. "All I heard was about five shots," said Jacqueilin Machado.

"The driver produced a machete and started making verbal threats at the officers when shots were fired," said Miami-Dade Police spokesperson Robin Pinkard.

Miami-Dade Fire Rescue responded and treated the suspect, but he later died.