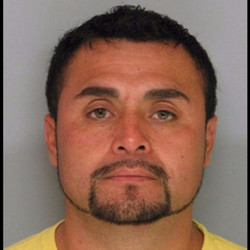 36 year old Rodrigo Guardiola was killed by police when he and another man fled a DUI checkpoint near the intersection of Winder Highway and Sloan Mill Road in Gainesville Georgia officials said.

Two troopers then began to pursue the suspect's Ford Explorer which then fled up Interstate 985 to Queen City Parkway where the driver turned north toward Gainesville.

As the driver got closer to Industrial Blvd., officials said he began to drive aggressively, striking a trooper's vehicle and ultimately causing a wreck. At this point, two people exited the vehicle.

Now on foot, at least one suspect continued to run from officers for nearly a mile before they were able to catch up with him.

That's when the situation took a violent turn as he continued to fight the troopers attempting to subdue him. Soon, officials said the officer was forced to fire on - and ultimately kill - the suspect