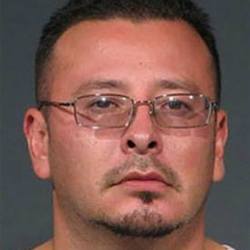 Officers shot and killed Richard Jacquez on the night of August 17, 2015 who was believed to be connected to a gruesome homicide last week on Lundy Avenue -- less than 24 hours after police shot and killed another man while conducting a follow-up investigation to that same crime, a department spokesman confirmed. The shooting was reported just before 7 p.m. on Kirkhaven Court at Stoneyhaven Way, San Jose police Sgt. Enrique Garcia said. Jacquez was being tailed by officers earlier Monday afternoon after he had not only been identified as one of the suspects in the death of 38-year-old Christopher Maxwell Wrenn, but officers also learned that the suspect planned to kill again Monday. His would-be victim was believed to be a woman who was in the car with the suspect when officers began tailing him, police said.

After initial reports from the officer, now, officials say Jacquez wasn't armed and didn't reach for his waistband. The officer shot at him first when his back was turned and again when he spun around. In explaining why the officer opened fire, Garcia said he feared for the safety of those inside the home Jacquez was running toward. Officers also believed he was going to kill the woman riding with him because she knew about the slaying Jacquez was tied to.

In September, 2016, two lawsuits were filed against the city of San Jose over the police shooting of Jacquez. The first lawsuit was filed on behalf of Jacquez's mother, Gloria Jacquez, and his unidentified son. The second suit was filed by Chandra Jacquez, Richard Jacquez's adult daughter.