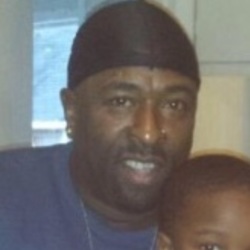 Richard Gregory Davis died in southwest Rochester Sunday morning after being Tased by a Rochester Police Department officer, leaving the police chief and mayor calling for calm and his family asking what exactly happened. Police responded to Tremont Street at about 9 a.m. Sunday upon receiving reports that Davis, driving a red pickup truck, had crashed into another vehicle and Calvary Spiritual Church, at the corner of Tremont and Morgan streets, then fled on foot. Police Chief Michael Ciminelli declined to release the man's name but family identified him as Richard Gregory Davis, 50, a former Marine, father of six and grandfather of 11. After police and firefighters arrived, Davis allegedly returned and, disobeying police orders, got back in his truck. He proceeded to crash into a street sign, a fence and a house, where he knocked over a gas meter, Ciminelli said. He then locked himself in the cab as officers shouted for him to come out with his hands up. Instead, according to police and a witness, Davis waited about five minutes, then came out charging at the police officers with fists clenched. One of the officers on the scene Tased him.