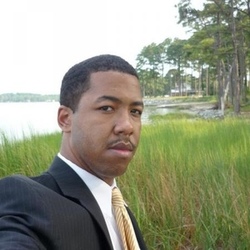 The man killed in a shootout with New Orleans and State Police that wounded five innocent bystanders was a member of a Houston-area gang known as 59 Piru Street gang, according to police in Texas and sources.

Reginald Romero Bursey, 32, did not have much of a record in the New Orleans area, but was considered 'armed and dangerous' and was wanted for two counts of aggravated robbery in Columbus, Texas for an incident on Sept. 8.

According to an incident report, the shooting started when an undercover NOPD detective identified Bursey at the corner of Canal Street and Elk Place and called for a uniformed officer for backup.

When they responded, Bursey allegedly open fired at the officer who could not shoot back and called for more officers on the scene. When they arrived, the shootout ensued that injured the bystanders.

Bursey then ran off, police said. He was chased down and was found hiding in bushes outside Tulane Medical Center. NOPD and LSP officers told Bursey to come out of the bushes and he fired again. That's when police said they returned fire, hitting him. EMS arrived and took him to the hospital, where he died from his wounds.