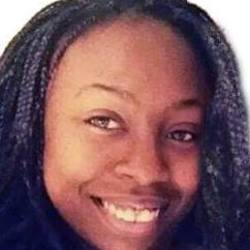 21-year-old local resident, Courtyana Franklin said Thursday that she saw Los Angeles police fatally shoot Redel Kentel Jones who was running from officers down a Baldwin Hills alley in Los Angeles, California. Courtyana Franklin questioned why police shot the woman, saying she watched Wednesday's events unfold from the side mirror of her car, which was parked in the alley near Marlton Avenue and Santo Tomas Drive. "I do know for a fact that she was not charging at them," Franklin said. "Those police were running. They were not trying to get away from her." The LAPD has said that officers deployed a Taser during the encounter. Franklin said she did not see or hear a Taser used. "I just saw her running," Franklin said. "And when they fired the three shots, I just saw her body fly on the ground." Cmdr. Andrew Smith, an LAPD spokesman, confirmed Thursday that two police officers chased the woman -- who was suspected of robbing a nearby pharmacy about 20 minutes earlier -- down the alley. He said Franklin's account differed from the initial investigation into the shooting but declined to elaborate.